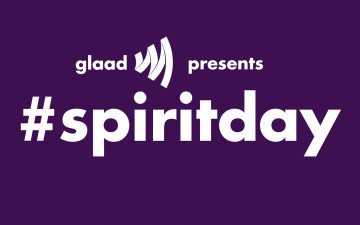 Millions go purple on Spirit Day in a stand against bullying and to show their support for lesbian, gay, bisexual and transgender (LGBT) youth. Observed annually since 2010, individuals, schools, organizations, corporations, and public figures wear purple, which symbolizes ‘spirit’ on the rainbow flag.

What is Spirit Day?

Spirit Day began in 2010 as a way to show support for LGBT youth and take a stand against bullying.  Following a string of high-profile suicide deaths of gay teens in 2010, GLAAD worked to involve millions of teachers, workplaces, celebrities, media outlets and students in going purple on social media or wearing purple, a color that symbolizes spirit on the rainbow flag.  Spirit Day now occurs every year on the third Thursday in October, during National Bullying Prevention Month, and has become the most visible day of support for LGBT youth.

This year GLAAD will celebrate Spirit Day – where we will all stand together; communities, corporations, celebrities, landmarks, faith groups, sports leagues, schools and so much more, to send a message of solidarity and acceptance to LGBT youth.

Where did the idea come from?

An amazing teenager wanted to remember those young people who lost their lives to suicide and to take a stand against bullying.

Students, schools, organizations, corporations, media professionals, celebrities, parents and many more. Everyone from Oprah to Cher to Facebook and MTV have gone purple for Spirit Day. Even the White House joined the cause!

How do I get involved?

It’s easy! The first step – pledge to go purple now! The official GLAAD Presents #SpiritDay campaign kicks off in September with new and exciting ways to participate, spread the word and stand up against bullying!